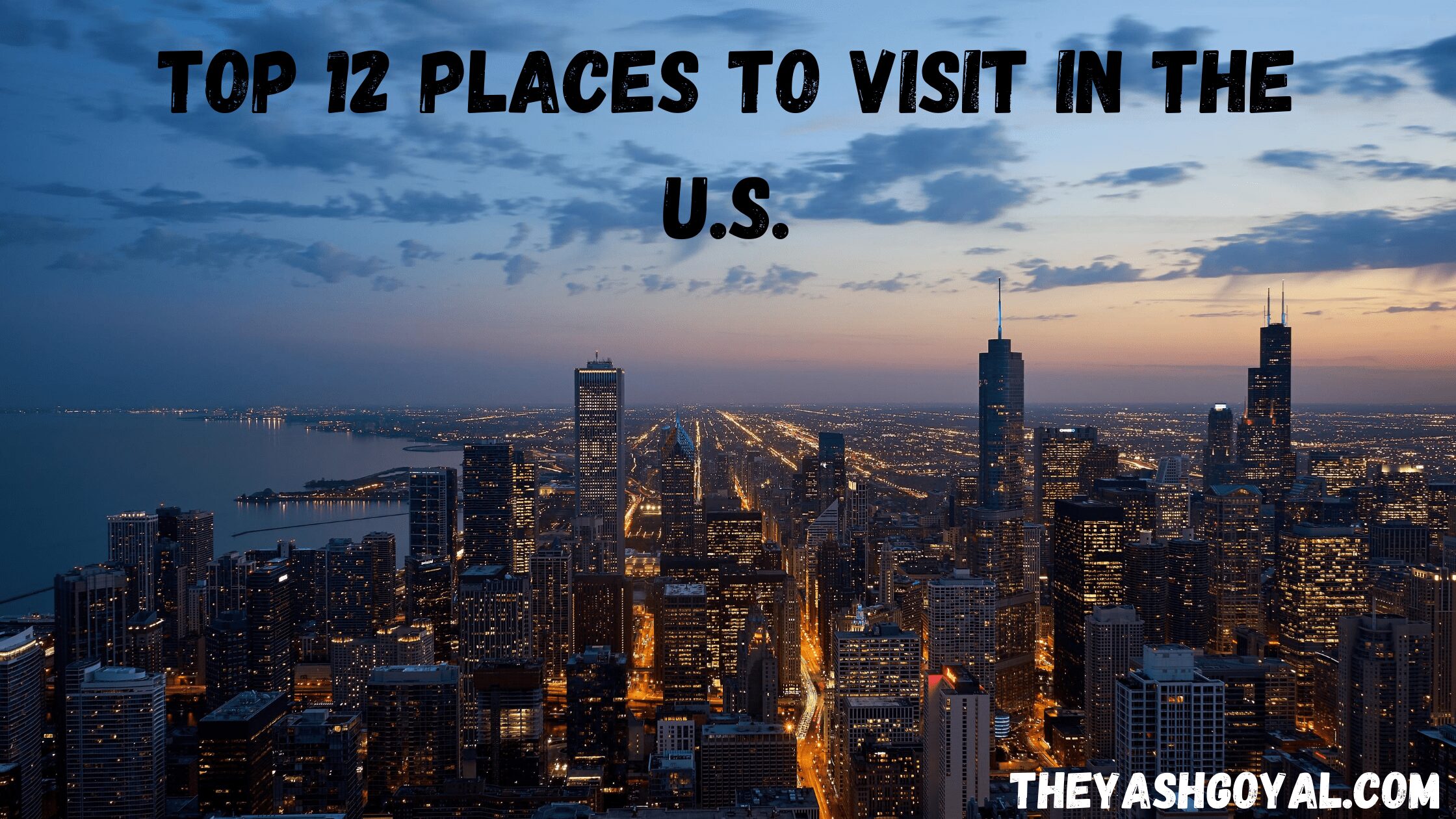 Places to Visit in the United states of America

With so much to see in this vast country, it can be difficult to know where to start when it comes to planning a trip in the United States of America. World-class cities, some known for history and others known for fun or glamour, give visitors a broad spectrum of places to choose from. The best places to visit in the United States may simply depend on your personal interests.

Along the Eastern Seaboard, New York and Washington, D.C. offer two uniquely different city experiences. Along the West Coast, San Francisco and Los Angeles are both hot spots for tourists. In the Southwest, Las Vegas brings the desert to life, and the Grand Canyon shows off one of nature’s greatest creations. Beyond the mainland are the beaches of Waikiki and the tropical Hawaiian Islands. These are just a few key locations, but wonderful destinations for any type of traveler can be found all over the country.

Discover more of America with our list of the best places to visit in the United States of america.

American icons like the Statue of Liberty, the Empire State Building, and Times Square are on every first-time visitor’s list, but they are just a few of the attractions to see in New York City, America’s most populous and most popular city. Also known as the “Big Apple,” New York City is a favorite destination for both domestic and international visitors.

Don’t miss a leisurely walk on the High Line, an old-railroad-track-turned-park that features greenery, artwork, and beautiful skyline views. Broadway and the Theater District is the place to go to see the latest plays and musicals, and if you’re an art lover, New York has an embarrassment of riches: the Metropolitan Museum of Art, the Museum of Modern Art, the Guggenheim Museum, the Whitney Museum of American Art, and the Frick Collection.

Or go shopping on Fifth Avenue, check out Washington Square and Greenwich Village and Rockefeller Center, take a walk through Central Park, and get awed by Grand Central Terminal. If you’re staying for more than a few days, dig deeper into NYC’s architecture or make a trip to Brooklyn.

Also Read: 5 Most Stunning Places In Europe You Can Visit This Summer

This incredible natural attractions is one of the most visited places in the United States. Carved out by the Colorado River, the Grand Canyon cuts deep into the landscape, creating dramatic cliff walls and ledges. Visitors standing on the rim of the canyon can see down to the canyon floor a mile below, and look out over the ridges and cliffs that run as far as the eye can see.

The South Rim is the most visited section of Grand Canyon National Park, with a large visitors center, regular bus service along the Rim in the high season, and a walkway that runs along the canyon with numerous viewing points and platforms. The North Rim, which also has lookout areas, provides a different perspective. This section of the park has limited access from November to May due to snow and winter conditions.

Say “aloha” to Hawaii, a top U.S. destination that’s a quintessential island paradise. From the natural beauty of its beaches and volcanoes to its rich Pacific culture, Hawaii is the perfect destination if you’re looking to really get away from it all. It’s definitely a relaxing oasis with perfect weather no matter when you decide to go; average highs range from 79 F in the winter to 84 in high summer, with average lows of 68 in the winter and 75 in the summer. Go hiking on the island of Kauai, see humpback whales in Maui, or play with fire at Hawaii Volcanoes National Park.

Bustling Times Square, famous for its flashing billboards, New Year’s Eve count down, and constant throngs of people, lies at the heart of Midtown Manhattan. This intersection is really about the energy one feels when standing on the corner as taxi cabs rush by and lights flash overhead, rather than any individual site on the square. While it is an interesting place during the day, it is probably best seen at night to experience the full impact.

The lure of Hollywood and its celebrities and the mild breezes from the Pacific Ocean keep Los Angeles on the top of the list of U.S. tourist destinations. Search for top-rated hotels on TripAdvisor near LA’s famous beaches like Malibu or Santa Monica for a luxurious stay. Go shopping on Rodeo Drive, tour Beverly Hills, and walk along the boardwalk in LA’s most famous beachfront neighborhood, Venice Beach.

Walking along the Las Vegas Strip, the main street leading through the city past the mega resorts, is like strolling through an amusement park for adults. Recreations of the New York skyline, the Eiffel Tower, the canals of Venice and many more foreign sites line this famous street. Beginning at one end with the Luxor Hotel, designed in a pyramid shape, a walk down the street will reveal an erupting volcano and dancing fountains, while inside the resorts are all kinds of oddities and entertainment.

Many of the attractions in Las Vegas are sights such as these, which can be seen for free. Vegas is also famous for its shows. World famous singers looking to settle down turn to Las Vegas as a home base, where they perform regularly. Unique performing groups from magic to comedy and acrobatics can also be found here nightly.

Washington, the capital of the United States, has miles of museums and monuments—almost all of which are free. That’s just one reason why it is one of the most visited cities in the country, especially for families and school groups.

The famous cherry blossoms are typically in full bloom late March to early April along the Tidal Basin, where you can also see the Jefferson Memorial and memorials to Franklin D. Roosevelt and the Rev. Dr. Martin Luther King Jr. Don’t miss the Washington Monument, the Lincoln Memorial, and the World War II, Korea, and Vietnam Veterans memorials on the National Mall.

San Antonio’s River Walk is a beautiful location and a great place to spend some time, whether you are looking for a place to wander, enjoy a meal, or look for souvenirs. Stretching along the San Antonio River in the heart of the city, this pedestrian area is lined with restaurants and outdoor dining areas, with everything from casual to fine cuisine. Small boats meander along the river and scenic arching bridges complete the tranquil scene. Large old trees drape over the river and walkway providing shade. The River Walk also features a variety of entertainment, with occasional live music and seasonal events.

Asheville sits right on the Blue Ridge Parkway, with its spectacular views across the southern Appalachians, and the Appalachian Trail, which runs right down Main Street. Its proximity to the Great Smoky Mountains makes it a jumping-off point for hiking or just jaw-dropping drives through the mountains. Rent a convertible for a once-in-a-lifetime experience. In town, check out the Biltmore, the largest privately-owned estate home in America, built by Goerge W. Vanderbilt in the Gilded Age. It makes for jaw-dropping of a different sort. Spend evenings in downtown Asheville, which is bursting with music, art, and restaurants worthy of serious foodies.

Situated along the Canada-US border, Niagara Falls is one of the most famous waterfalls in the world. The water from Lake Erie flows into Lake Ontario over these massive waterfalls, known for the great quantity of water that is constantly tumbling over the vertical drop. The amount of water going over the falls is actually reduced in winter, when more water is used to produce hydroelectric power. Most visitors will not notice a difference.

Niagara Falls is actually a set of three falls, consisting of the largest section known as Horseshoe Falls, a second section on the American side of the river known as the American Falls, and a much thinner section located next to the American Falls, known as Bridal Veil Falls. On clear days, the plume of mist rising from Niagara Falls can be seen from as far away as the CN Tower in downtown Toronto, Canada, on the opposite shore of Lake Ontario.

Also Read- 15 Best Things To Do In London For Free

Chicago has long been called the “Second City,” coming in second to New York City in both size and population. A beacon in the Midwest, Chicago is actually third in population these days, but it has a skyline, restaurants, shopping, museums, and activities that easily rival NYC and LA. If it’s baseball season, don’t miss seeing a Cubs game at famous Wrigley Field.

Check out the Magnificent Mile, where you’ll find every upscale shop imaginable and fantastic restaurants. Chicago is home to some of the nation’s most important buildings, and you can see them all on a guided architecture tour on land or from a boat on Lake Michigan. The Art Institute of Chicago is one of the top art museums in the country, and Millennium Park is Chicago’s newest attraction.

Home to the most popular beach in the Hawaiian Islands and possibly the most famous beach in the Pacific, Waikiki has been a tourist destination for over a century. Today this area is a cross between tropical paradise and modern city. Relaxing on this beautiful stretch of beach with palm trees blowing in the wind will certainly let you know you are in the tropics, but the high rise buildings and busy street in behind are a reminder that you are not far from civilization. Shopping, dining, surfing, and sunbathing are all part of what makes this small section of Oahu so popular with tourists of all ages from all parts of the world.

7 Ways To Stay Positive During Pandemic 2022