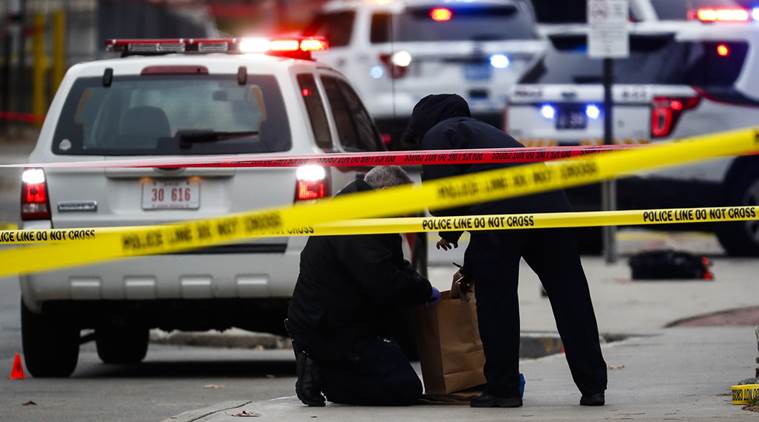 Two people, a civilian and a security guard, were shot amid the melee, as crowds descended overnight on major commercial areas, including the iconic Magnificent Mile, superintendent David Brown said during a press conference on Monday.

Authorities in Chicago are restricting access to the city’s downtown after caravans of looters smashed windows, damaged storefronts and stole merchandise across downtown overnight, leading to the arrests of more than 100 people.

Two people, a civilian and a security guard, were shot amid the melee, as crowds descended overnight on major commercial areas, including the iconic Magnificent Mile, superintendent David Brown said during a press conference on Monday.

More than 400 officers were dispatched to downtown after seeing social media posts encouraging looting in the wake of an officer-involved shooting on Sunday on the South Side, Brown said. Thirteen officers were hurt in incidents that included broken windows, stolen merchandise and shots fired at police, he said.

“This was an assault on our city,” said Chicago mayor Lori Lightfoot, who appeared with Brown during the press conference. “It undermines public safety and breeds a sense of insecurity among our residents. It also undermines our recovery efforts. These same stores that were hit last night, were hit previously, not just by the looting but by closures related to Covid-19.”

Bus and train services were temporarily suspended in the downtown area. Downtown access was to be restricted overnight, and the city’s iconic bridges over the Chicago River were raised to limit access into the city’s loop.

Some unrest had started on Sunday with a crowd growing in a South side neighbourhood following a shooting incident involving police and a 20-year-old man, who was injured but is expected to have survived, according to Brown.

Police had responded to a call of a man with a gun, and the individual had pointed the gun at officers, Brown said.

Safest places to visit in India during COVID-19

Trump says he is considering pardon for leaker...