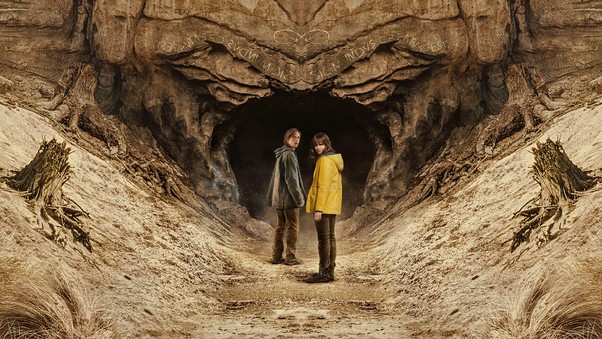 Dark Season 3 is the ultimate salute to the complexities and knots human emotions can create. And it’s delivered in a chilling yet precise manner. The time travel continues, but this season adds another dimension to the story, literally — an alternate Winden, where Jonas is never born.

As Jonas sees Adam kill Martha in the climax of Season 2, another Martha appears to tell him that she has come from another world. In Season 3, she takes him to the other Winden.

The characters are the same, but Mikkel never travels back in time in that Winden and so Jonas is never born. He and Martha still share an inexplicable bond, but they also discover slowly that they finally become Adam and Eve — arch enemies driven by their own strong emotions towards each other. But then there’s Claudia, who is playing a much more complex and bigger game than either of them. She, too, is driven by the love for her daughter Regina.

Conceptually, this season is far more complex than the earlier two. And being a series driven by theoritical science, quantum physics to be precise, it delves deep into the concept of cause and effect and even touches upon paradoxes like the Schrödinger’s cat experiment. The question asked here, like the paradox, is to what extent can we influence the flow of time and events by observing or interfering with a particular situation?

That analogy here is Winden, where multiple people driven by myriad emotions travel back and forth in time, influencing both the causes and effects of their actions. In doing so, they create an infinite loop of dark events involving Winden and its residents.

With some fantastic acting, excellent screenwriting, great direction and that ever-haunting title and background score, the third and climactic season of Dark is a masterpiece in its own right. True, the climax sequence may remind you of Avengers: Endgame, but the creators have managed to justify even the mirroring effect in the title rolls with the events in the season. The visual continuity created with a warp effect is another master stroke.

One, however, tends to notice what seem to be makeup errors, especially facial scars or cleft lips switching sides, in certain scenes. But that’s a drop in an ocean; a glitch in the matrix.
So, go ahead, go Dark.