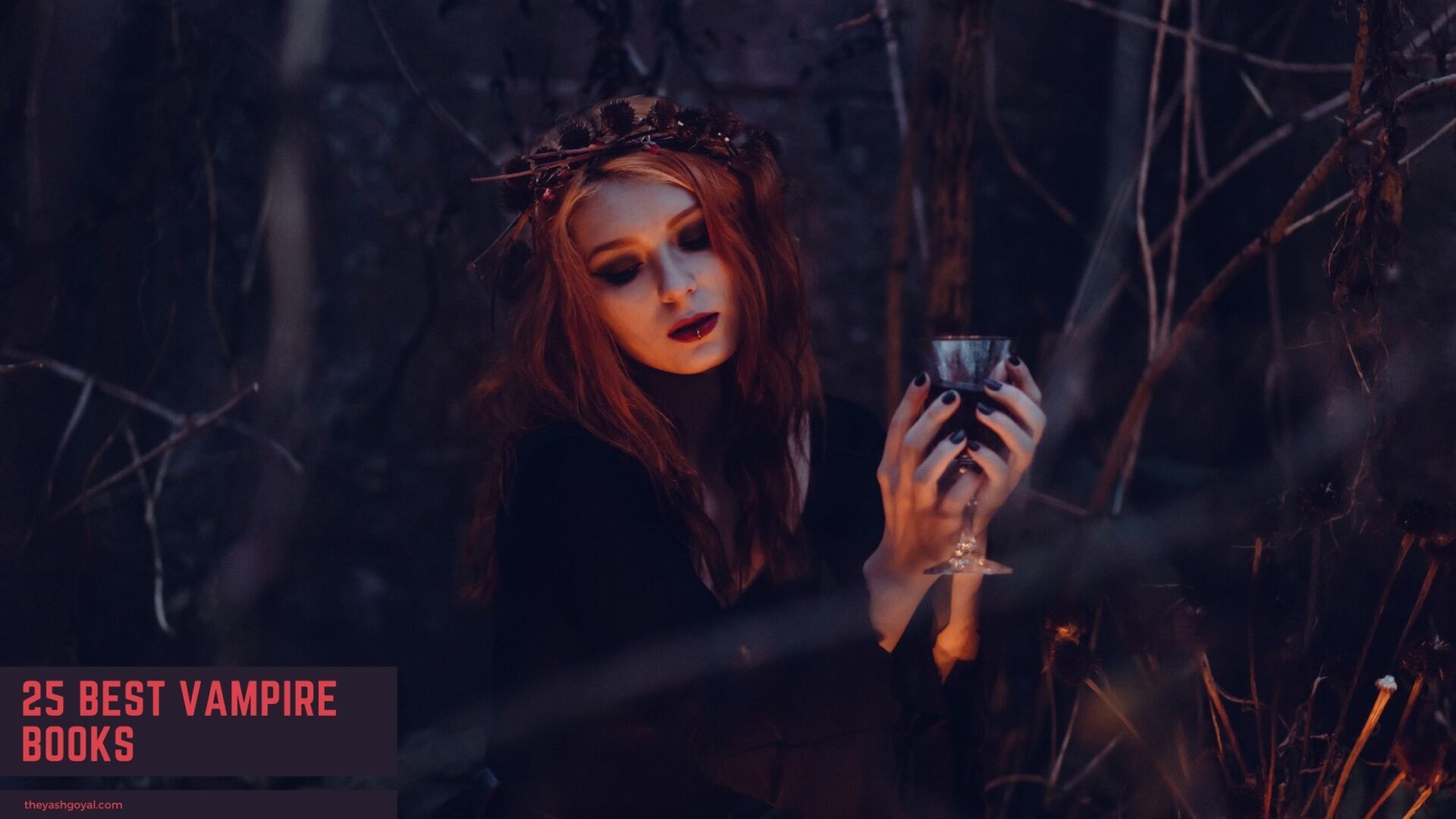 Ever since the extremely popular Twilight, alluring vampires have captivated many YA readers, drawing them in with danger, seduction, adventure, and romance. Vampires are still popular in YA paranormal romance, and with good reason – they promise fantasy and mystery, but are crafted in such a way that teenage readers can easily relate with them. Best vampire books

Below, you’ll find some of the best YA vampire books of all time – plus some you’ve probably never heard of.

So if you want to read about more YA vampires, then go check out this list!

Isabella Swan’s move to Forks, a small, perpetually rainy town in Washington, could have been the most boring move she ever made. But once she meets the mysterious and alluring Edward Cullen, Isabella’s life takes a thrilling and terrifying turn. Up until now, Edward has managed to keep his vampire identity a secret in the small community he lives in, but now nobody is safe, especially Isabella, the person Edward holds most dear. The lovers find themselves balanced precariously on the point of a knife-between desire and danger. Deeply romantic and extraordinarily suspenseful, Twilight captures the struggle between defying our instincts and satisfying our desires. This is a love story with bite.

“Twilight is a love story about two people from very different worlds that form a seemingly impossible relationship. If you’re looking for unlikely romance and loveable well developed characters, pick this one up!” – Hillary, Amazon user. [Review from Amazon]

St. Vladimir’s Academy isn’t just any boarding school—it’s a hidden place where vampires are educated in the ways of magic and half-human teens train to protect them. Rose Hathaway is a Dhampir, a bodyguard for her best friend Lissa, a Moroi Vampire Princess. They’ve been on the run, but now they’re being dragged back to St. Vladimir’s—the very place where they’re most in danger. . . . Rose and Lissa become enmeshed in forbidden romance, the Academy’s ruthless social scene, and unspeakable nighttime rituals. But they must be careful lest the Strigoi—the world’s fiercest and most dangerous vampires—make Lissa one of them forever.

“It’s an amazing and well written book. I loved it. I would recommend this book to anyone. Especially if you like or love stories about vampires but with a twist.” – Paige Hahn, Amazon user. [Review from Amazon]

A SHADE OF VAMPIRE BY BELLA FORREST

Sofia Claremont is sucked into a nightmare on the evening of her seventeenth birthday – and she cannot wake up. She is kidnapped by a dangerous pale creature and taken to the Shade, an enchanted island where the sun is eternally forbidden to shine, uncharted by any map and ruled by the most powerful vampire coven on the planet. Sofia wakes up there a slave, a captive in chains. And it gets worse, as she gets selected to be part of a tree-top harem of the dark royal prince, Derek Novak.

Despite Derek’s addiction to power and obsessive thirst for her blood, Sofia soon realizes that the safest place in the island is within his quarters. She knows that she must do all within her power to win him over, if she is to survive even one more night.

“I can not wait to move on to the next book. I love all the evil that is lurking and how everything is NOT sweet.” – CJ, Amazon user. [Review from Amazon]

COURT OF VAMPIRES BY MEGAN LINSKI

Lysandra was born for one reason; to kill shifters. Princess of vampires, the heir to Vlad Dracula’s throne and the last descendant of Princess Anastasia, Lysandra lives in a castle of witches and human slaves,engaged to a dark vampire prince and prophesied as the one who will end the war between vampires and werewolves forever. Everything changes when Lysandra finds a dying werewolf. best vampire books best vampire books

She takes him into her care and quickly falls in love, unable to explain the magical connection between them. If she’s discovered, she will be put to death. But how can she stop the war when her worst enemy is her true love?

“Court of Vampires brings a different take on a familiar story and makes it unlike any other out there. There’s plenty of action, a forbidden romance, strong characters, creepy villains, detailed writing, and a breathtaking ending. If you’re looking for a refreshing new paranormal story, then Court of Vampires is the book for you!” – Megan, Amazon user. [Review from Amazon]

Ruxandra learned everything she knows while growing up in a convent. Training to be the perfect nobleman’s wife, she relishes the prospect of a simple life. But everything changes when her father, Vlad Dracula, retrieves her on her eighteenth birthday.

Securing her a marriage is the last thing he has in mind… After he performs a mysterious ritual over her, Ruxandra gains uncontrollable supernatural powers. Alone, terrified, and faced with an unknown future, she is left to forge a new life for herself. There’s only one thing she knows: if she doesn’t learn to control her unnatural instincts, she’ll destroy every last shred of her humanity.

“Finally finished the book, the beginning draws you in, has very descriptive gore throughout the read, keeps you on your toes wondering “will this really happen?” if you know your history of blood suckers you’re In for a sure treat at the very end! I was completely blown back and can’t wait to read the second book.” – Mariah Furia, Amazon user. [Review from Amazon]

In a world where vampires reign supreme, humans are little more than livestock. Their sole purpose is to satisfy their masters’ appetites. When Draven Castle, a lowly vampire who owns no livestock, captures a runaway human child, he defies his government for the first time in a century and takes what is not his to take—her blood.

Years later, he encounters Cali, the same human girl, now forced to work in a dangerous profession. As the secret they shared draws him back to her time and again, he realizes they are not as different as the government would have them believe. Humans are not just brainless animals. They are people. But if he is to save Cali from her cruel master, he must do more than remember his own humanity—he must forget it.

“I really enjoyed this book. I got absorbed in it from the first page and finished it in two days, which is fast for me. When I finished it, I couldn’t help but think it was one of the most perfect books I’ve ever read.” – A Cat and a Book, Amazon user. [Review from Amazon]

Charlie Bennet is an Ash – a person of increased stamina, prone to angry outbursts and insatiable thirst, and completely beautiful and strong. Unlike the others, though, she’s a woman – ash are supposed to be male. She’s the first female ash, the unicorn of the Hive – the gated compound in portlant that humans have designated to isolate vampires and ash from society.

Only a select few will be alived to live at the Hive, and Charlie has to fight to earn the right to become a citizen of the Hive. This means she has to survive the culling – a series of fights to the death. Good thing there’s Ryder, the mysterious lead ash enforcer, who seems to always have her back. But dark secrets have to be unraveled, and when they do, it will take more than one person to save Charlie.

“This book starts off strong and keeps you engaged. Loved the twists thrown in. Would recommend this to those who want a change from regular vampire books.” – Amazon Customer [Review from Amazon]

The only way to save her is for Arianna to give herself in her mother’s place, to pick a prince to marry and give her soul away. She would take the blood oath to become one with the demons and give them an heir. It would mean becoming a princess of hell, surrounded by fire, brimstone, pain, and misery. But the unexpected finds her – beauty, magic, love. The princes of hell are keeping secrets from her, however. Secrets that could shatter everything.

“This was a great book to read. I was completely enthralled by it and could not put it down until I finished reading it entirely. I will definitely be getting the test of the series.” – Maria Otero, Amazon user. [Review from Amazon]

I never wanted to be Chosen. Married off to one of the Elites and whisked away to the City of Lights. It was supposed to be some kind of honor, to share our bodies, our blood, to preserve the peace between our two races… for some girls in my town, it was a fairy tale ending. For me, it was just another way the Elites reminded us that we were slaves. But then I met Damien. The most beautiful boy I’d even seen, and a prince. He saved me, and showed kindness in the woods. His sky blue eyes stirred up feelings I’d never had before. Dreams I’d never allowed myself to consider. There’s no way he would choose me.

But then he did.

The only problem is, I get the feeling he doesn’t even want me. Everyone wants to know why I’m so special, what he saw in me. I wish I knew. Because I’m leaving everything behind for him, to serve him and preserve the covenant. But when I get to the City of Lights, I discover the reality is far more complex than the legends they’ve been feeding us. Not everybody is happy to be ruled. And some will fight to be free. Once I get a taste of revolution, it lights my blood on fire. But that means my new husband is also my worst enemy.  How can I share a room, a bed, without tipping him off?

“This one is a page-turner. I can hardly wait for the full novel to come out. TASTE is a tantalizing taste of coming attractions.” – Lacemaker, Amazon user. [Review from Amazon]

THE VAMPIRE GIFT 1: WARDS OF NIGHT BY E.M. KNIGHT

Caught between three vampire brothers and coveted for her bloodline, Eleira is swept into a world of supernatural magic where nothing is as it seems and betrayal lurks behind every corner. She must fight for her survival or risk being made prey for the very creatures who keep her there. But when she discovers a dark, twisted prophecy with her at its center, she is pulled deep into the heart of The Haven… and realizes that the vampires she seeks to escape might just be the key to her salvation.

“This book took me completely by surprise. I especially enjoyed the way the story unfolded from the perspective of each of the main characters. This is the first time that I have read a book written in this manner, and I’m looking forward to reading about the challenges the main characters will have to face and overcome. I recommend this book highly to anyone who enjoys this type of fiction. It’s a rare treat.” – John D. Taylor III, Amazon user. [Review from Amazon]

5 Books That Guarantee to Take You Back...

5 Books That Guarantee to Take...

How to Benefit by Having a...